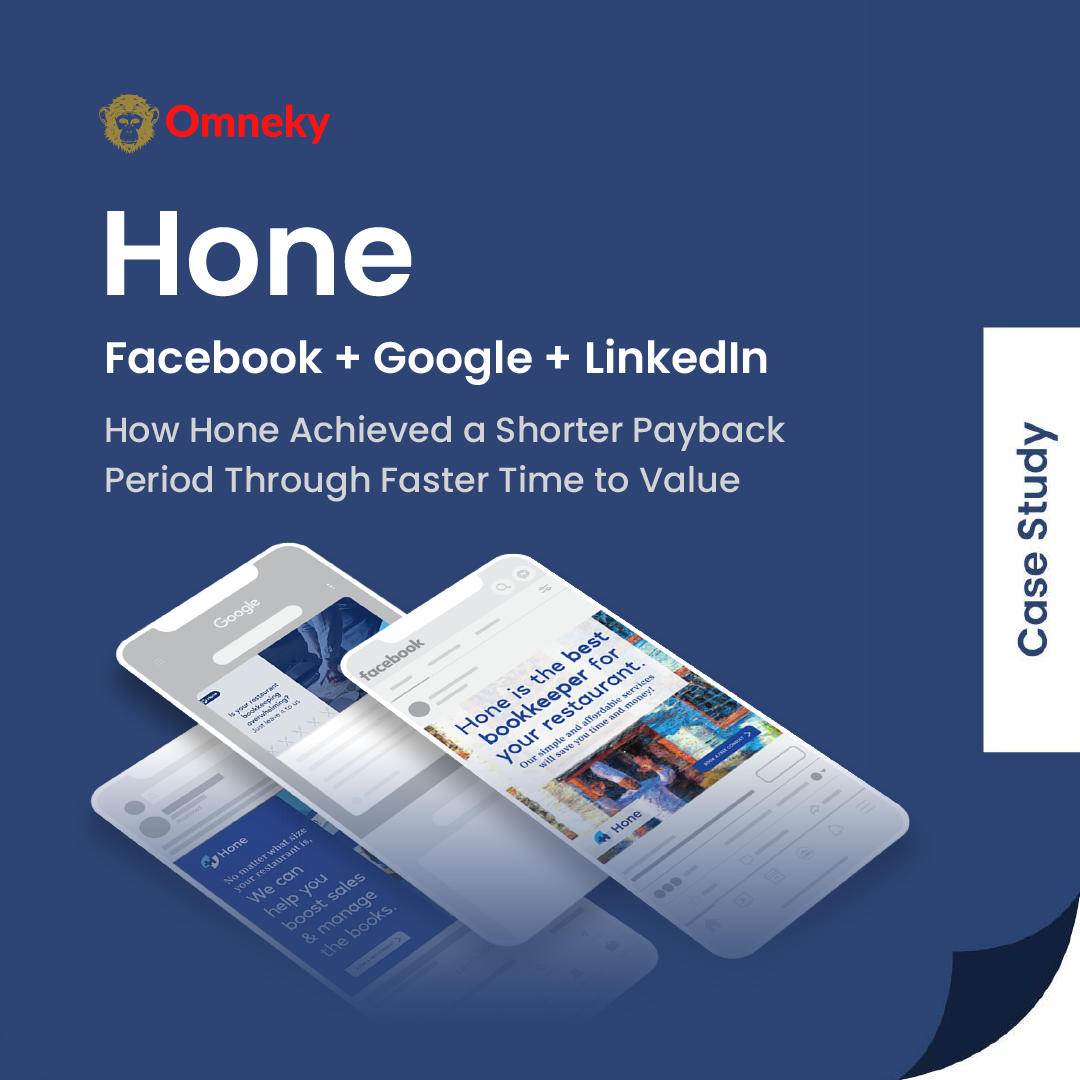 By taking over as your bookkeeper, Hone will not only provide operators with the data they need, but turn that data into actionable insights, helping restaurant operators make profitable decisions more easily.

Having previously employed a direct sales method to drive awareness (door-to-door and event selling), Hone was looking to explore paid advertising to scale to a larger audience than they could ever reach through direct sales.

Hone had a solid conversion rate from demo to close, so the crux of their challenge was finding how to get in front of enough restaurant operators. This way, the sales team could regularly nurture these leads, educate them on Hone's new and improved way of bookkeeping, and close multiple operators each month in a traditional top-down B2B SaaS model.

It didn't take long for Hone to realize that paid advertising was the missing piece of the puzzle, so they sought a solution that would allow them to employ an efficient channel mix/diversification strategy. If Hone could get in front of enough restaurant operators on multiple channels and personalize messaging across all these touchpoints, they could quickly bring in the number of leads needed to fuel their sales-led growth motion.

Hone could have partnered with an agency, but with limited visual/brand assets at their disposal, it would have taken weeks before being delivered creative, and likely a few months before they could gauge what channels were working and scale ad spend. Additionally, they needed an easy way to track and report all of their data in a centralized fashion, while receiving insights into which channels were scalable vs. those that weren't.

Rohit Shenoy, CEO and Co-founder at Hone, explained to us that the ease of use of Omneky's platform compared to other solutions out there was a significant competitive advantage.

“In one week, Omneky had 7 ads built in this nice clean dashboard where I was able to comment and provide feedback really efficiently. Instantly, I was able to contrast that with  the google doc used by my previous agency where the messaging was not great. “

Hone had discovered Omneky to be an efficient way to automate much of the ad reviewing and approval process. With an AI tool integrated into the dashboard that automatically flags spelling errors, and an annotation tool that allowed Hone's team to screen-grab text or visual elements from specific frames in the ad to request changes, the entire process was incredibly streamlined. In fact, Omneky's team generally made edits within an hour of being provided feedback. Rohit was impressed with Omneky's ability to prioritize technology and efficiency without sacrificing quality.

“The ads were spot on: the language, the visuals, and I barely communicated with them!”

Through offering an entire suite of AI creative tools, Omneky is able to rapidly generate and deploy dozens of unique ad creatives with little to no brand assets. In Rohit's case,

“I didn’t have much, I told them here’s my website, a one-pager, and some material I have done on the messaging side of things.”

How was Omneky able to get Hone up and running within a couple of weeks without having many assets at their disposal? The answer is through seamlessly integrating DALL-E 2 into their workflow.

Hone was looking to test out new messaging to find something that resonated with restaurant operators who need new bookkeepers for their restaurants. With AI, Omneky's team could feed successful elements from Hone's previous messaging into DALL-E 2 to discover entirely new ad angles that Hone could rapidly deploy across multiple platforms.

For example, through prompt engineering (coming up with the right queries for the AI), Omneky came across an interesting generation for the query "A Chef on a Pile of Money." After deploying on Google, this quickly became a champion asset for Hone, helping them bring in one of the first leads that they closed.

Omneky's ability to get ads up and running for Hone with actionable insights within the first two weeks of the partnership proved to be a key factor in Hone's success. Amongst many things, it allowed Hone to close their first lead within a month of working with Omneky, drastically decreasing their payback period, and allowing them to invest in an omnichannel strategy immediately after.

“We started on Google and were up to 3 channels within 8 weeks.”

How does Rohit see Omneky as a valuable tool for other early-stage companies looking to drive growth through paid ads?

“If they can continue to offer a low price to start, a quick path to value, and capture a piece of that value they are delivering, that seems compelling.”

Ultimately, Omneky proved to be the right solution for Hone’s, bringing a perspective driven by data insights, and iterated upon by AI!