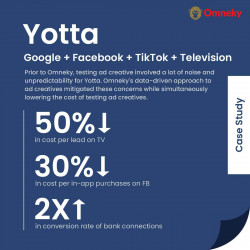 When Omneky partnered with Yotta, the banking platform with the mission to change people’s opinions of personal finance. When users enroll with Yotta, they’re entered for a chance to win $10 million daily. When signing up for the credit and debit card, users have the opportunity to have their next purchase free.

In our partnership, the main challenge we faced included the growing pains on Facebook and Google. With an established prospecting campaign, Yotta needed help with soaring cost per app installs and down-funnel quality assistance. So, while Yotta was attaining expensive leads, they needed to lower costs, scale spend, and break into other methods of paid social advertising.

Initially, Omneky’s strategy was to use already existing creative on top of AI curated top-performing copy to prospect a less-expensive, higher-intent audience. Once Yotta was able to attain lower cost per lead on Facebook, Omneky expanded audience capture to capture down funnel events like tutorial and in-app purchases from our leads campaign. As we continued to optimize ad creative, we were able to obtain cheaper costs, down funnel costs, and eventually expanded to both Google and TikTok using similar advertising strategies.

The next step was to take ads and a prospective audience to the big screen. Using ad platform TV Scientific, Yotta launched its inaugural ads on television with phenomenal results.

In its first month, Omneky was able to help Yotta slash the cost of acquisition by a third for sign-ups. Additionally, ad testing already landed comprehensive results in the first round. On television, we found that ads in the 30 second range garnered the cheapest cost of acquisition at half the cost of 15 second and 1 minute ads.

Furthermore, we were able to establish a baseline of qualitative success with A/B testing different creative. We found that for Yotta, including 2 people in the video ads with copy overlay of “Win Up to $10 million every week” proved to be the third cost of acquisition.

Through television placements, we are also able to better test time-of-day placement of ads, different avenues of channels, and geographic fencing.

Thus, Omneky is able to iterate on past success and continue to build communicative ads that both capture the attention of viewers and establish strong and informative copy tests.

Finance company Yotta wanted to keep low lead costs and maintain a stable influx of lead generation through paid social. With a tight grip on branding, the online banking platform facilitates credit and debit card programs as well as weekly drawings where users can win up to $10 million. However, creating and testing a concise yet effective narrative proved to be difficult across multiple platforms for the Yotta in-house creative team. 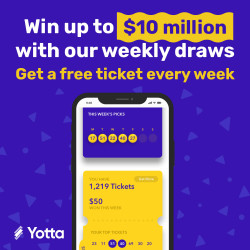 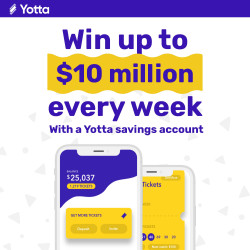 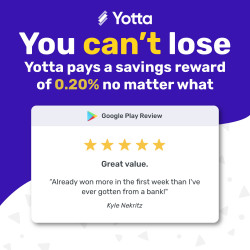 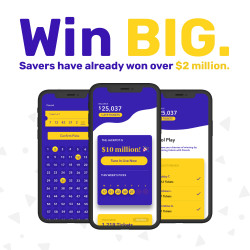 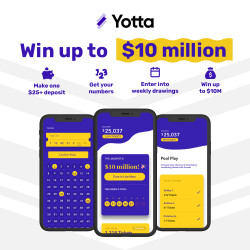 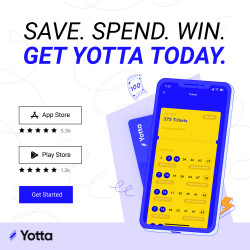 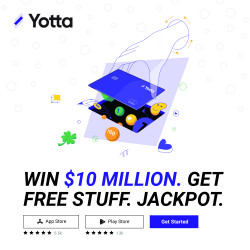 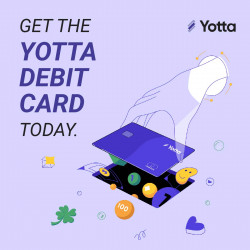 In just minimum duration, we achieved

Decrease In Cost/Lead on TV